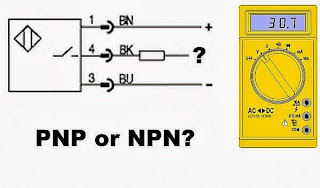 If you are replacing a 3 wire sensor which operates on DC voltage, it is important to know whether the sensor's output is a PNP or NPN type. Often this information is printed on the sensor itself, but it is not uncommon for it to be scratched off over a long period of time.

Set the multi meter to DC voltage. This is indicated by either the letters "VDC" or "DCV" or by a symbol which looks like 3 dashed lines over a solid line. There are usually several levels within the DC voltage setting. Choose the "600" level.

The power will need to be ON to perform this test, so use caution when attempting the following. Connect two of the sensor wires to the power supply. If the color combination of the wires is blue, black, and brown, then normally, the blue wire connects to 0v and the brown wire connects to positive volts. Touch the black meter probe to the 0V wire of the sensor. Connect the red meter probe to the signal output wire of the sensor. This wire is normally black. The meter should read "0."

Force the sensor to output. If it is a photoelectric sensor, block the photoelectric beam. If it is an inductive proximity switch, introduce a small piece of metal in front of the sensor. For an ultrasonic sensor or a capacitive sensor, you can just use your hand to make the sensor output. Be sure that the sensor is detecting the object. Many sensors have a small LED that illuminates when the sensor detects it's target.